Some facts about domestic abuse:

Select each of the words below to find out more about these types of abuse:

Physical abuse is the most recognisable form of abuse. It can range from a slap or shove to a black eye, cut lip, or broken bone.

In the most extreme cases it can result in death.

Physical abuse doesn’t always leave visible marks or scars.
Having your hair pulled or an egg thrown at you is domestic violence too.

Many women experience domestic violence without ever being physically abused.

Emotional abuse can turn to physical violence over time.

This includes using force or threats to make you have sex or perform sexual acts with which you are uncomfortable.

It can also include taking and distributing of sexual photographs without your consent.

The Crown Prosecution Service definition says that this is “a crime or incident, which has or may have been committed to protect or defend the honour of the family and/or community”.

Honour Based Violence is often committed with some degree of approval and/or collusion from family and/or community members. It is a collection of practices, which are used to control behaviour within families or other social groups to protect perceived cultural and religious beliefs and/or honour.

Physical violence can occur when perpetrators perceive that a relative has shamed the family and/or community by breaking their honour code.

Women are predominantly (but not exclusively) the victims of honour based violence which is used to assert male power in order to control female autonomy and sexuality.

Such crimes cut across all cultures, nationalities, faith groups and communities.

They transcend national and international boundaries.

A forced marriage is a marriage in which one or both spouses do not (or in the case of some adults with learning or physical disabilities, cannot) consent to the marriage and duress is involved.

Duress can include physical, psychological, financial, sexual and emotional pressure. An arranged marriage is not the same as a forced marriage.

Female Genital Mutilation (FGM) is any procedure that’s designed to alter or injure a girl’s (or woman’s) genital organs for non-medical reasons.

It’s sometimes known as ‘female circumcision’ or ‘female genital cutting’. It’s mostly carried out on young girls. There are no recognised physical or hygiene reasons for FGM to be carried out. FGM procedures can cause:

Men can experience domestic violence in both hetrosexual and same sex relationships.

Campaigners claim that men are often treated as ‘second-class victims’ and that many police forces and councils do not take them seriously. 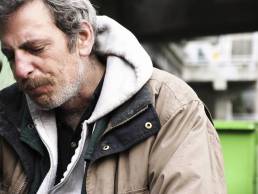 Men experiencing domestic abuse may feel ashamed about what is happening or feel like they have done something to deserve it. They might be worried that people will think they are less of a man for ‘allowing’ themselves to be abused.

Refuge places and outreach support for men experiencing domestic abuse is available, although there is less provision than for women.

For the year ending March 2020, the Crime Survey for England and Wales (CSEW) estimated that 1.6 million women and 757,000 men aged 16 to 74 years experienced domestic abuse in the last year.

The signs of domestic abuse are the same for both male and female victims.

What might a person in an abusive relationship be feeling and experiencing?

The victim may be overwhelmed by fear;

A fear of further violence or threats to children’s safety.

He or she often believes that they are to blame and that by changing their own behaviour the abuse will stop.

Research shows that this is not the case.

She or he may experience many conflicting emotions like loving their partner but hating the violence.

She or he may live in hope that their partner’s good side will reappear.

They may be dependent upon their partner, emotionally and financially.

They may feel resigned and hopeless and find it hard to make decisions about the future.

Men may feel that the abuse is an attack on their masculinity.

Select each of the words below to find out more about these:

Some cultures make it difficult for women in an abusive relationship to seek help.

A failed marriage is often seen as the woman’s fault and she is blamed for letting down the family honour.

In some cultures a woman may not be able to divorce her husband due to religious reasons.

If someone is admitted to the UK with leave as spouse, unmarried partner or civil partner of a British citizen, or of a non-citizen who is settled in the UK, they may find it harder to leave an abusive partner because it will affect their right to remain in the UK.

In such cases, the victim will have no recourse (entitlement) to public funds (ie benefits).

The Home Office No Resource to Public Funds policy explains what to do in these circumstances.

In some cases women and children have received threats of deportation if they report abuse or had their passports confiscated by the family.

Some people face the challenge of English not being their first language.

When working with these individuals professionals should use approved interpreters who have a DBS check.

It is not appropriate to use family members or friends of the victim or members of the extended community to which they belong.

Written information should be available in alternative languages.

Where the abuser is also the primary carer this can make the victim more vulnerable.

A number of reports show that women with a disability are twice as likely to experience domestic abuse as women without a disability.

Some refuges may not have appropriate facilities to accommodate women with physical or learning disabilities.

LGBTQ+ people may be at more risk of domestic abuse according to research. Issues of stereotyping can cause shame, isolation and fear of having children removed if they speak up.

Some women refuges may not accept transgender men who have not fully transitioned.

People can also be excluded from some services due to issues with alcohol or drugs and these issues may make it hard for them to engage with support.

Being in an abusive relationship may mean that a family or victim move more regularly.

This may cause social isolation, poverty or discrimination.

This may make it hard for them to be engaged with support services including health, social care and education.

There are clear links between mental illness and domestic abuse.

Women with mental health issues who are experiencing domestic abuse may feel they will not be believed if they speak out.

Women and children who experience abuse can go on to develop depression, anxiety and other mental health issues.

LGBTQ+ victims of domestic abuse are twice as likely to attempt suicide.

Evidence suggests that LGBTQ+ victims and survivors are not accessing services at the same rate as others in the population. 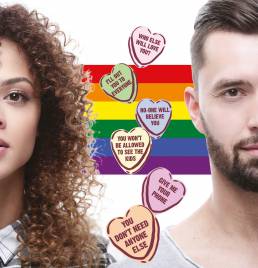 Victims With Mental Health Issues are more likely to:

Victims of abuse with mental health problems can also become homeless due to a number of reasons. 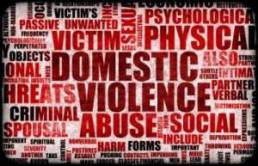 Of crimes recorded by the police in the year ending March 2020, the victim was female in 74% of domestic abuse-related crimes. 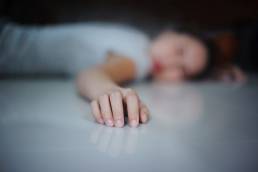 Signs to look out for

We’ve explored some different types of abuse. But what are the indicators that abuse is taking place?

Select each of the words below to find out more about these indicators of abuse:

The following types of bruises are rarely accidental:

Behavioural signs to watch out for include: 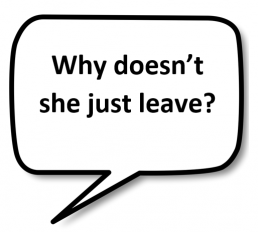 Why doesn’t she just leave?

Statistically, the most dangerous time for a female victim of domestic abuse is when she leaves her abuser.

She is most likely to be murdered by him at this point.

There are also other significant issues to consider: 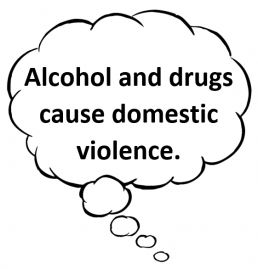 Alcohol and drugs cause domestic violence.

Whilst there are links between people who have alcohol issues or who take drugs and domestic abuse, there is no evidence that alcohol or drugs cause domestic abuse.

Domestic abuse is about having power and control over someone, whilst taking drugs or misusing alcohol may affect people in different ways, they do not make people become an abuser. 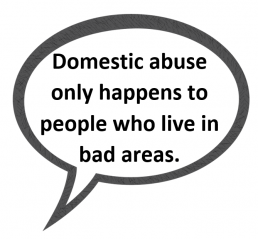 Domestic abuse only happens to people who live in bad areas.

Anyone can be a victim of domestic abuse.

It doesn’t matter where you live, whether you have a job or not, how much money you earn, what your gender or sexual orientation is.

People of all backgrounds, cultures and religions can experience domestic abuse. 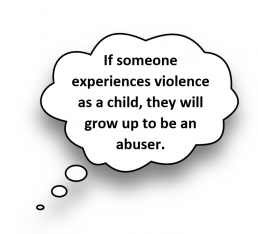 If someone experiences violence as a child, they will grow up to be an abuser.

It is acknowledged that children growing up in a violent home are affected in a number of ways and some children who experience abuse do go on to be abusive in their relationships.

But this does not apply to everyone.

Many people are repelled by violence because of what they witnessed as a child and the damage it causes.

Using violence or controlling behaviour is a choice that abusers make. 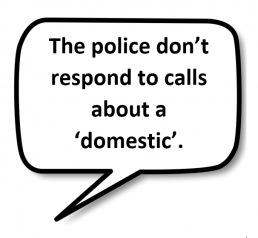 The police don’t respond to calls about a ‘domestic’.

Domestic violence is taken very seriously by the police.

Officers receive training in how to respond to calls about domestic abuse and what they should do when arriving at the scene.

Many forms of domestic abuse are a crime and the police can pursue a crime even without the consent of the victim. 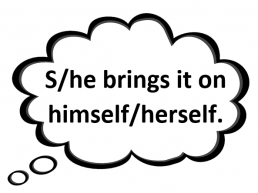 S/he brings it on himself/herself.

The victim is NEVER to blame for domestic abuse.

There is NO EXCUSE for violent and abusive behaviour. 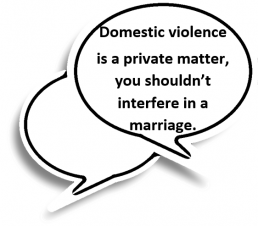 Domestic violence is a private matter, you shouldn’t interfere in a marriage.

Some people think that what goes on in the home is private, and they shouldn’t get involved.

This view is outdated and harmful.

Domestic abuse can affect anyone and we all have a responsibility to speak out.

Domestic violence is a crime – It is against the law.

Previous Module
Back to Course
Next Module