Review the short video, using the chapter markers to jump to each of common statements regarding domestic abuse:

Cambridgeshire Data for 2020-21 highlights that:

Select each of the headings to expand the definitions

Behaviour of a person...

Behaviour is abusive if it consists of any of the following:

It does not matter whether the behaviour consists of a single incident or a course of conduct.

For the purposes of this Act..

For the purposes of this Act – two people are “personally connected” if any of the following applies:

For the purposes of subsection (1)(f) a person has a parental relationship in relation to a child if:

A range of acts designed to make a person subordinate and/or dependent by isolating them from sources of support, exploiting their resources and capacities for personal gain, depriving them of the means needed for independence, resistance and escape and regulating their everyday behaviour.

An act or a pattern of acts of assault, threats, humiliation and intimidation or other abuse that is used to harm, punish, or frighten their victim. This definition includes so called ‘honour’ based violence, female genital mutilation (FGM) and forced marriage, and is clear that victims are not confined to one gender or ethnic group.

The Duluth Power and Control Wheel

In 1984, staff at the Domestic Abuse Intervention Project (DAIP) began developing curricula for groups for men who batter and victims of domestic violence. They wanted a way to describe battering for victims, offenders, practitioners in the criminal justice system and the general public. Over several months, they convened focus groups of women who had been battered. 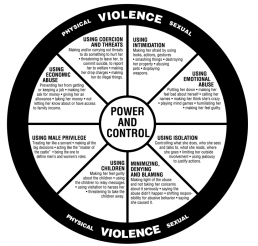 “We listened to heart-wrenching stories of violence, terror and survival. After listening to these stories and asking questions, we documented the most common abusive behaviors or tactics that were used against these women. The tactics chosen for the wheel were those that were most universally experienced by battered women.”

Battering is one form of domestic or intimate partner violence. It is characterized by the pattern of actions that an individual uses to intentionally control or dominate his intimate partner.

That is why the words “power and control” are in the center of the wheel. A batterer systematically uses threats, intimidation, and coercion to instill fear in his partner. These behaviors are the spokes of the wheel. Physical and sexual violence holds it all together—this violence is the rim of the wheel.

By naming the power differences, we can more clearly provide advocacy and support for victims, accountability and opportunities for change for offenders, and system and societal changes that end violence against women.

Back to Course
Next Module